Before I get into the build, I want to provide a quick shout out to Terran Craft, and its author/maintainer, Max. As a Starcraft player and a Terran main, I enjoy his thoughtful commentary and analysis on the game from the Terran perspective. He offers insight into builds and the current state of the meta game.

Now the disclaimer. If you do not play Starcraft or have no interest in e-sports or high-level gaming, this will be a terrible read for you. You will encounter terminology and expressions which will be meaningless to you, but if you are the intended audience, then you should consider incorporating the build when you ladder (i.e- use it every game vP).

The build is a one base 2-1-1 build that brings 8 marines, 2 siege tanks, 3 scvs, and a medivac to Protoss’ natural expansion at 4:20. Innovation unveiled this little beauty in GSL Ro8 and absolutely trounced Trap. Protoss have been going blink stalker more and more often against Terran and this build absolutely crushes any sort of early blink play.

At this point, Innovation calmly sieges just outside the natural and begins shelling buildings, using his Medivac for high ground vision, while constructing bunkers with his SCVs. The SCVs double up in utility by repairing the tank and medivac as needed. Trap has 5 Stalkers and a sentry and a 40 - 24 worker lead. If Trap holds this push, he is very far ahead as Innovation has cut SCVs at 24 and does not have a second base on the way. He is effectively, all-in with this attack and any reinforcing units but there is a liberator already on the way and he has 3 marines coming at a time. He doesn’t put an add-on on the second Barracks, opting to spend that time making more marines.

Innovation could have likely started marching his marines over sooner but otherwise executes flawlessly. So why was Trap caught so unprepared for this attack?

When Trap initially attempted to probe scout, it got denied because Innovation blocked the probe’s entrance by starting a depot. The SCV did not stay to finish it so he did not lose the mining time associated with that SCV. Innovation keeps his marines at his natural to deny any further scouting of the natural by Trap. 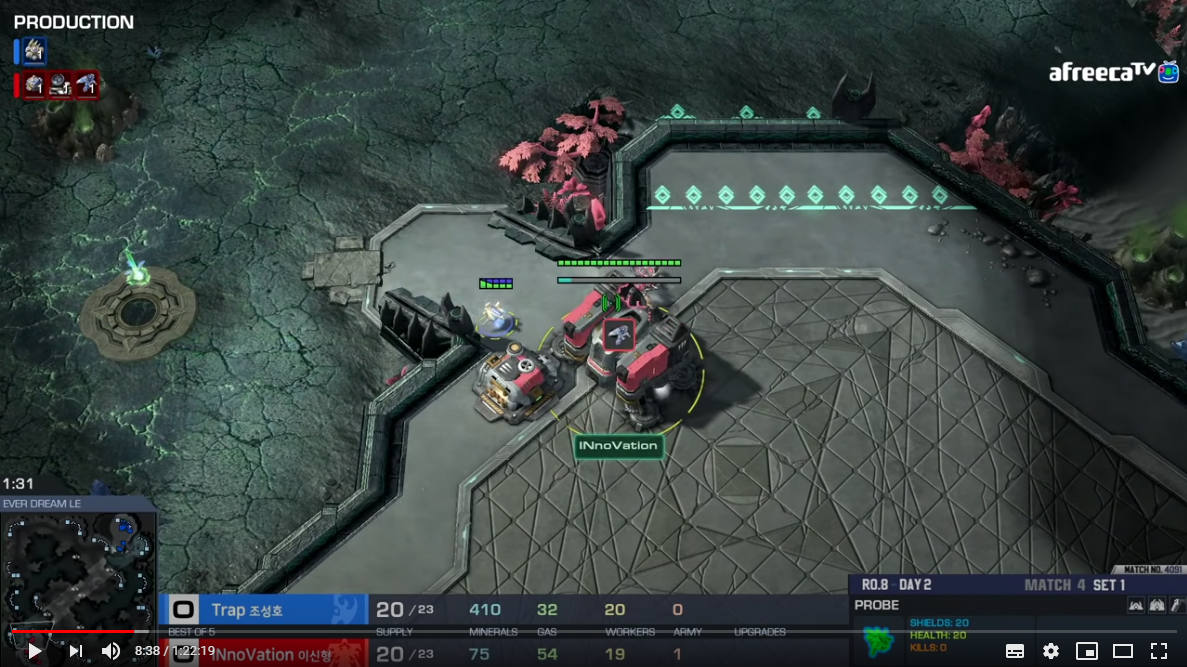 When Innovation does decide to move out, his army is scouted in the middle of the map by a Pheonix Illusion. However, his two siege tanks are in the medivac so the full scope of the attack is unknown. 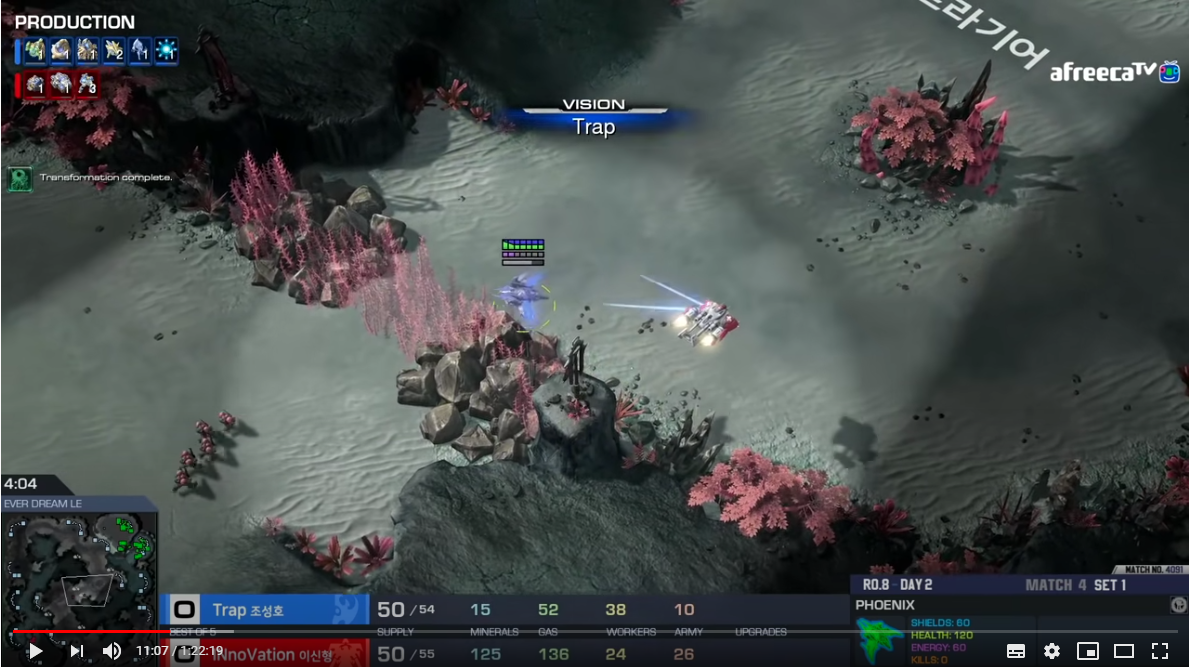 The current TvP meta is characterized by 2 and 3 base play. While a 1-1-1 is a common Terran opening, the addition of that second Barracks gives Innovation the necessary punch in both the initial attack and the reinforcing marines. This is a very committal step as that 150 minerals and the subsequent 50 minerals per macro cycle could easily be another Command Center. The popularity of blink stalker play makes this an attractive build as siege tanks are great against blink stalkers and blink stalkers perform poorly when pinned.

The Pros and Cons

While powerful, the build has very obvious drawbacks. If you can’t win with the push or fail to destroy the enemy’s natural, then you will be very far behind. If protoss can hold off long enough to get DTs, you will be hard-countered and will lose unless you save a scan. An oracle could possibly show up at your base and decimate your mineral line, slowing down your reinforcements. This could likely be insured against by rallying some marines to your mineral line but that would sacrifice front line forces which are important to this build.

I have had a lot of success using the build in 1v1. My friend and I also ladder 2’s and he plays random. Our weakest pairing has traditionally been double Terran. We decided to adopt this build for when we roll double Terran and it has paid dividents. Having two Terran also allows for flexibility out of the Starport, which can allow one player to make a raven and safeguard against DTs.

Implications on the Metagame

Throughout the game, Tasteless and Artosis would comment that the RTS metagame always begin with one base builds, then as a game progresses and players improve and better understand the game, they learn to take expansions and do so more comfortably. Then, other players will identify weaknesses in their build and bring back “thug” builds like this one.

I expect this build to gain popularity on the ladder and for protoss to be aggressive in pursuit of early scouting information but I don’t expect it to be adopted as a common build. TY did whip the build out against Harstem in TSL 5 and ZombieGrub couldn’t help but spoil GSL results.